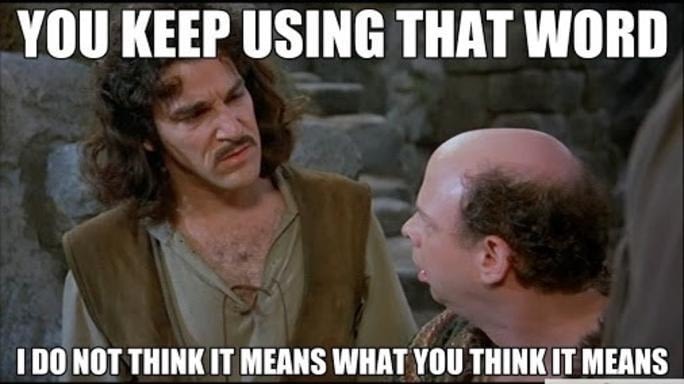 Everything you think you know is more complicated than you think it is.

Labels are useful, but like any human tool, can be weaponised and used harmfully. Labelling oneself can be an act of empowerment, labelling others is generally only OK when you’re using the labels they’ve chosen to wear. Imposing labels on people in order to Other them is a hostile act (but not necessarily an unreasonable one. “Serial killer” springs to mind.)

The world is huge and full of stuff, and everything in it gets more complex the more closely you look at it. Humans survive and thrive in this whirling, teeming mass of stuff by taking mental shortcuts. For example; sighted people believe what their eyes tell them, thinking that they are perceiving the world as it ‘really’ is. Yet our vision works by taking fast snapshots around a limited field of focus that are then stitched together by the visual cortex which fills in the blanks to present a smooth, uninterrupted view to the conscious mind. The firm belief that we can rely on the evidence of our eyes is nothing but that; belief. In fact, we see only what we expect to see, until something jumps out and surprises us. That mechanism is a shortcut that helps us get survival stuff done.

We like shortcuts. They save time and effort, mask complexity, give us a sense of control. Our brains take shortcuts all the time without our noticing. Every time we learn something from someone else, we’re taking a shortcut across having to resort to trial-and-error to work it out for ourselves.

Some shortcuts are just too convenient to avoid, unless you work very hard at it. Narratives like Us/Them, Right/Wrong, Good/Evil are shortcuts that help us rationalise conflict dynamics. Cognitive biases allow us to to extrapolate a mental model of the world with only partial data, because there is more going on around us than could possibly be squeezed into any single human brain.

Certainty is the shortcut that shields us from the dizzying and terrifying nature of a Universe so much more detailed and complex than our limited perception or comprehension can process.

Quite a lot of the time, the inferences and implications we arrive at via these shortcuts turn out to be incorrect. We keep using them though because a) it’s easier, and b) we don’t like confronting the depth of our own ignorance.

Labels are a shortcut we use to save the effort of describing something in detail every time we want to talk about it. This only works as long as the details are mutually agreed-upon and static, otherwise we end up with misunderstandings, confusion, arguments and conflict. But as our species tests new theories, discovers the previously-unknown, refines, develops and innovates, the static labels we’ve been using are shown up for the crude approximations they really are. This is very hard for us to deal with.

Language is a social tool, language acquisition and use relies on interaction with other people in order to happen. The words or signs we use reflect the ideas we’ve learned from others during the course of our lives, which in turn shapes our own experiences and how we express them. The purpose of language is communication; a necessary survival tool for any species that self-organises into groups. Humans are – as far as we know – unique in the sophistication of our cognition, and language is thought to play a major role in that distinction. We have ideas. Metacognition, if you want the technical term.

Now, if you live your life believing that a word has a specific definition, and the definition is comprised of particular criteria, you will probably get quite cross if someone else comes along and tells you that your definition is wrong, the criteria are inaccurate or your usage of that word is incorrect. Feeling cross about being contradicted is a very natural human thing to do, and if the belief that has been challenged is strong enough, a challenge to it can feel like a declaration of hostility. That’s especially likely to be the case when a word carries strong emotional associations, such as when that word is critical to how a person perceives and understands their own experiences, or if the word has negative connotations.

Humans can only perceive a tiny fraction of this continually-changing universe, so we rely on the illusion of stasis to cope with it all.

Here’s the dilemma. In order for labels to be useful, they need their meanings to be agreed upon. That means consistency in their use and definition.

Discovery and innovation keep showing us that there’s always another layer of complexity waiting to be uncovered, that the new stuff we encounter keeps contradicting our previous ideas, and that no two humans will ever agree on absolutely everything. That makes the use of labels a problem as well as a benefit, because even if all humans spoke only one common language, sooner or later, someone would make a discovery or have an idea that changed their understanding and usage of the label. (What would usually happen at that point is their denouncement as a crank and a heretic, possibly dangerous and almost certainly wrong. Only if enough people of authority and privilege were to add their concurrence, would the label be updated to incorporate the new idea, at which point the process begins again)

There are many different ways to enjoy sex. Labels are applied to sexuality, they don’t dictate it.

Statistic probabilities are not certainties. Labels are approximations.

Your lived experience is valid and so are your feelings BUT they aren’t an authoritative representation of anyone else’s experiences or feelings. If you go around invalidating someone else’s lived experience because it doesn’t exactly match yours, you earn yourself the label of ‘rude fuckwit’

Everything you think you ‘know’ is more complicated than you think it is. Including you.

Stereotyping is lazy and toxic. Gatekeeping is arrogant and harmful. Use labels carefully..