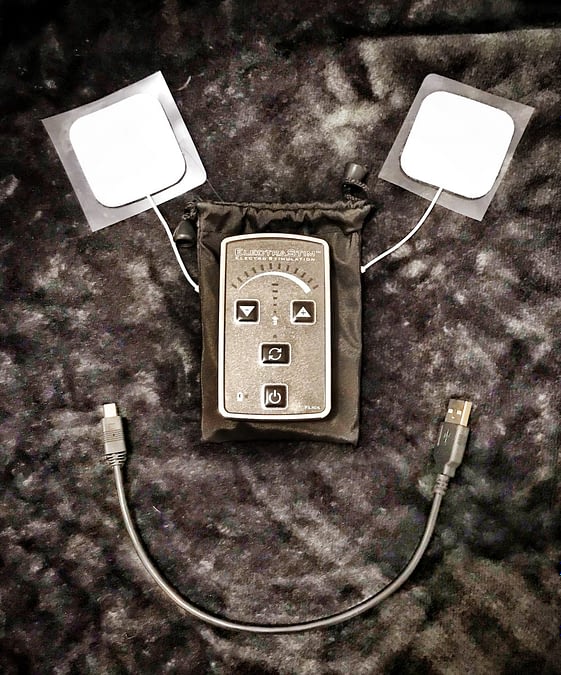 A short while back, I made a comment on Twitter in relation to saving up for some e-stim gear. Like the Fairy Godmother of kinky delights, the magnificent Girl on the Net offered me her old kit, now superseded by her acquisition of an AXIS. I was so thrilled, I offered to take her up the Shard* right away.

And this is how I became the excited owner of an ElectraStim Flick EM60. Being the total goddess that she is, GOTN had also included some surplus pads, so that I could get right on with sparking up my sexy time.

As luck would have it, the convergence of Satan’s Tsunami and various other wonkiness woes delayed my first electrosex session until a week or so later, but this weekend the stars aligned to provide an opportunity to play. Reader, it was fucking amazing. Let me tell you all about it…

Having done my research carefully, I gave the Fella a safety tutorial before we powered up. The golden rules of electrosex; the smaller the contact area, the more intense the sensation. And no electrical contact above the waistline. We pored over the pictures in the instruction book, the website and the excellent Beginners Guide to Electrosex by Joanne’s Reviews, and declared ourselves ready to try out electrosex.

First; we used the pads on my butt cheeks. It began as a light tingling, almost like the onset of pins and needles but less prickly. Turning up the power intensified the sensation, until at the highest levels, the tingling turned to a stinging heatless burn. Weird. Very weird, but…not unpleasant. Curious. Almost irritating but not quite. Almost pleasurable…actually, yeah. Pleasurable in a bizarre way.

Slowly, he took me through the levels, testing the different patterns. At low intensity, I preferred the continuous or slow-wave effect; in the middle, I liked the fluttering feel of the quick pulse. High-intensity I could only take in very short intervals, preferring to reserve it for the ‘flick’ mode. Oh yes, about that…

Since the Flick comes with a motion detector that translates movement to impulses through the electrodes (hence; ‘flick mode’), we thought it’d be rude not to take advantage, and so for a while we amused ourselves greatly with this.

He sat in front of me, leaning back against the pillows with his thighs across my outstretched arms and controlled the stim unit, tapping it lightly against the mattress or shaking his wrist sharply to deliver lightning bolts to the pads. On my front with my wrists cuffed to the bedposts; I lay between his legs, buried his cock deep in my mouth and writhed, squealing to the weightless phantom impacts lashing at my arse. Freaky-wonderful electrical torture and a mouthfucking; result. Now and again, we paused to discuss comparisons with our library of hitty things – was it like the tawse? The belt? What about the big metal paddle? “No heft,” I explained, panting “Like the tawse or the belt, but with no after-sting and no feeling of heat on my skin.”

“This is fun,” he remarked; a glowing testimonial in Fella-terms.

Next we moved the pads to my labia, parallel with my (by then, soaked and twitching) cunt and, kneeling behind me, the Fella slid himself inside me to enjoy the tingling of power flowing around his dick. I wasn’t just smirking at the slightly surprised note in his voice when he murmured “oh yeah, that’s good”, I was also smiling with benevolence at his evident enjoyment. And grinning with delight at how good it all felt.

I hadn’t considered that the contact pads were now much closer together, but when he turned up the power and fucked me vigorously in time to the fast pulse of the current setting, I recalled that detail pretty fast. Oh my. Incredibly intense. Frankenfucking FTW.

I had something of a revelation; just how numb my cunt is when I’m being fucked. All the sensation is usually concentrated on the first inch or so of depth, the rest is just pressure – if I can feel it at all until it bounces off my cervix. I think it’s a sensory processing thing; to really feel anything inside me I usually have to close my eyes and concentrate. Because of this I usually have to squeeze quite hard with my cunt muscles to make the most of what I can feel; which isn’t always comfortable for my partner. The Fella much prefers me to relax – which, while phosphorescently hot as fuck, also means that to produce the type of response from me that he most favours, requires quite a degree of exertion on his part. With the addition of electricity flowing through me however, I experienced mind-blowing levels of dick-awareness, a glorious bassline for the invisible percussion stinging my skin ; every stroke from tip to hilt sliding deliciously within me as though my cunt had been upgraded with high definition by the Sextech Fairies.

I came so hard I screamed. Three times, I think.

He‘s not too keen on the idea of wearing the other pad so we can share the current equally, preferring to enjoy the secondary stimulation he gets through contact with me. I have no complaints about my position as his charged-up cock-vessel; aside from the amazing physical sensations, the whole business had a delightfully kinky edge of ‘mad scientist experiments with electrifying helpless sex puppet for his sadistic pleasure’. Oh yes. Oh, hell yes.

With huge thanks to GOTN for the Flick pack, and to my Fella for being such a good sport about my nerdy enthusiasm for sextech.

More about electrosex from GOTN, and e-stim from Joanne’s Reviews.

3 thoughts on “Frankenfucking is Fabulous”