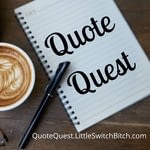 This is a real-life story from a long time ago. Lots of things have changed for me, and all of them for the better. When I saw the quote, I immediately thought of moments like this. It’s not sexy or funny, but it does reflect a long journey from then til now.

“The thing is that you brought this out in me. How could I want it with anyone else”

“That sounds like a failure of imagination”, I say briskly; sensing with discomfort that that this could turn into one of Those Conversations. You know, the ones where I grit my teeth in order to stop myself telling you that I can’t make you happy, that emotional blackmail sends me running for cover, that the burden of carrying your self-esteem issues should not lie solely upon my own shoulders. The ones where you pronounce your devotion in increasingly extravagant terms, each one sounding less like an affirmation of affection and more like the patriotic rabble-rousing of an authoritarian dictator. Those Conversations, which end with you clinging or sulking and me feeling guilty for not just walking away and sacrificing you to save myself already.

“That feeling comes from you, I didn’t give it to you. You don’t need anyone else to complete you, you’re a worthy person in your own right.” Picking my way through your emotional minefield is something that I should be expert at by now, but have never quite mastered; my first indication that I’ve made a misstep is usually some kind of explosion. If only I were brave enough to demand honesty from both of us, but I’m too weak and you’re too insecure, and both of us have our reasons. I steel myself to prevent my tone turning censorious, critical, or conciliatory; red rags to your raging bullish pride, sparks to the fragile kindling at your foundations.

“But we have something special,” you insist, “I could never be happy with anyone else. That’s the gift you’ve given me. I feel like a complete person for the first time in my life. Thank you.”

“Am I doing something wrong by telling you how much you mean to me?”

My awkward silence needs to be broken fast, but I can’t think of anything to say that won’t sound like rebellion or reprimand. It hasn’t quite got to the point yet where anything I might say will construed as an attack. Think.

“I’m not sure that ‘you’re my survival strategy’ is the most romantic thing I’ve ever heard” I try for jocular, mentally crossing my fingers and praying for a reprieve. You bark a perfunctory laugh and press the advantage again.

“But that’s what love is all about isn’t it? Helping each other survive in a harsh world. It’s how I know we’re meant to be together, because I’d be so lost without you.”

“Next you’ll be asking for a kidney.” I remark, half-jokingly.

“Well, I’d give you a kidney if you needed one. Are you saying you wouldn’t do the same for me?”

No, I wouldn’t give you a kidney, because they’re my fucking kidneys and I need them.

“We’re probably not even a close enough tissue match.” Laugh and let it drop, dammit.

“Well, I’d do anything to save you, but if you don’t consider me worth saving then you should say so now, and I’ll just give up and stop bothering with anything.”

I’m up and moving before my brain catches up with what my body is doing. On my feet and marching for the living-room door. I’m not having this conversation again, I’m not. I’ll say something I’ll end up regretting – or you’ll give me reason to regret. Something which will cause upheaval and heartache and hardship for us both, which neither of us is equipped to cope with.

Relationships take work, but how much work is too much, and am I even doing enough? I can’t expect to have everything my way, but am I really so unreasonable a person that I’m the one who is in the wrong every time? I don’t have an actual reason to leave, only my vague feelings of resentment and oppression, which is probably just my sketchy mental health making me paranoid. I’m afraid to be on my own. I have too much invested in this relationship. You won’t let go easily.

I tried to walk away from you once before but my resolve was swept away with your flowery apologies and hangdog expression, disarming candour “I’ve been a right bastard, I’m sorry” as you explained to me how pranging your car had upset you and had made you behave badly. Frozen in the dingy office corridor, torn between wanting to say “it’s not going to work out” and feeling obliged to validate your obvious contrition. Hating myself as I sat with you in the pub at lunchtime for not being brave enough to say no, feeling a guilt which was to become familiar over the years; when all I ever wanted was to be loved, how can I be ungracious – ungrateful, even – as to reject it now that I am?

You’ll stamp and clatter, bellow and swear, then give me the silent treatment for a while. Cold radiating off you like you’ve been dipped in liquid nitrogen until I’m shivering with psychomatic hypothermia. Eventually, I’ll apologise for upsetting you, you’ll gradually thaw, and I’ll be so relieved at end of hostilities that it will feel almost like happiness for a while.

How different would my life be today, I wonder, if once – just once – I’d said what I was thinking?

2 thoughts on “Those Conversations”