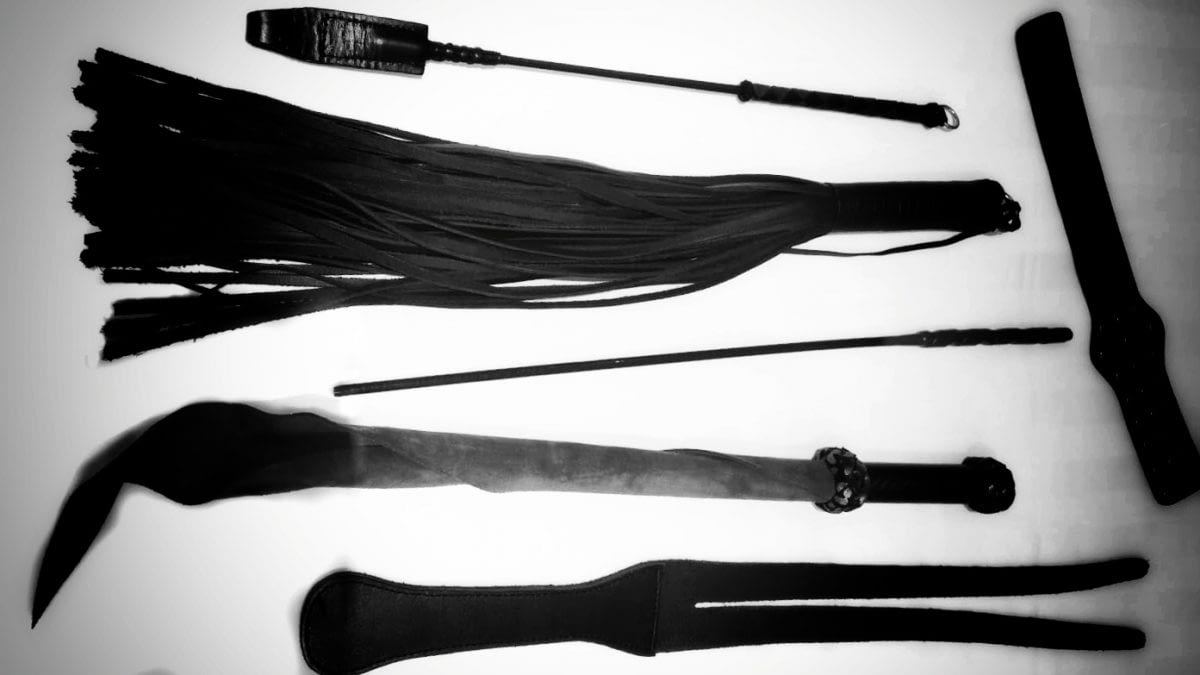 A fun and educational evening of hitty things

A bit of background to set the scene: I’m an experienced and enthusiastic long-term kinkster. My Fella had only vanilla relationships before getting together with me. Over the last couple of years, we’ve been learning, negotiating and compromising to build our unique dynamic somewhere in between his sexuality and mine. It’s most definitely not about me ‘teaching’ him not to be vanilla or him trying to get me to be less kinky – either of those objectives would be an unfair imposition on the other and destined to end only disappointment or resentment. Rather; we’re on a journey to find what works to please and fulfil both of us, together.

We’ve done quite a lot of impact play – it’s one of my major kinks. I love the sensation and the subby headspace of being hit, certain types of pain in this context are an aphrodisiac for me. He’s not naturally a sadistic type, he takes his pleasure from my gleeful reactions and evident enjoyment.

A while back, we made a friend; K, a lovely woman who just happens to be a D-type with sadistic tendencies. Apart from being excellent company for chatting about stuff both on- and offline, we also benefit from her insights into her experiences of BDSM play. Her mindset is very different from both mine and his, and we‘ve had long, interesting conversations in which we learn from each others’ perspectives. Long story short; The Fella wanted to experience how it felt to be on the receiving end of hitty things. He’s not at all masochistic, the object of the exercise was not pleasure-seeking but education. Topping is outside my comfort zone in any context so I wasn’t able to be the one to satisfy his curiosity – K, however kindly offered to step up and wield the hitty things, along with her insights on the topic.

So, we arranged a mutually-convenient time and gathered in her apartment this evening.

They’d both been concerned that my seeing him on the receiving end of impact action – even in an educational context – might alter our dynamic, or my feelings about him. That idea was so alien to me that when they raised it, it took me a while to understand what they were getting at. Why should it? It’s not as though there would be any D/s or erotic element – this would be classroom, not playroom. I reassured them both, confident that their concerns were unlikely to be realised in practice. In fact, I was thrilled and awed at how keen The Fella was to learn and how courageous of him it was to volunteer to step outside his comfort zone, into mine. Of course, there would be significant differences; he wouldn’t enjoy being hit like I do, and K wouldn’t be wielding the crop/tawse/cane/paddle/flogger/etc with the intent of provoking arousal for either of them. But still, this felt like a huge affirmation of his commitment to our kinky play and a further confirmation that he doesn’t just do this stuff to humour me, but that it forms a genuine and significant part of our dynamic.

I did want to be present for the workshop, even if I weren’t actively participating. I’ll freely admit to being emotionally insecure – the thought of being left out or excluded, even without that specific intent – makes me anxious as hell. Besides….while I absolutely didn’t want to gatecrash or hijack the session, the remote possibility of being a demo model for hitting techniques was an added bonus. All in the name of education, you understand 😋.

K had thoughtfully mustered an array of implements to experiment with (she has a splendid collection of which I am most envious!)

So, we turned up, had a chat and a cuppa, then got down to business. He parked himself, trouserless, on the bed (the piece of furniture with the most convenient location, height and access), I sat in a chair close by, and K offered him his choice of implement to start on. They tried out a variety of items and a range of strikes; for each he described the sensation he experienced and we discussed how/why the implement produced that effect. I had great fun getting all geeky about the physics of impact (velocity, energy distribution, surface area) and the biological factors (fat and muscle density, skin elasticity, tension, blood flow) that were combining to produce the resulting experience.

During a cigarette break (yes, all three of us are dirty smokers) we chatted about the more esoteric – but just as valuable – psychological factors that influence our experiences of kink. K likes to cause discomfort (consensually and for the enjoyment of both parties); she likes to be in control and sadistic play is her most serene headspace. The Fella’s kink is not so much being dominant for its own sake as gaining pleasure from my positive responses to his dominance. (I’ve said plenty about my own kinks on this blog; I won’t belabour this long post by repeating myself.)

The most salient insight from the session, he reported, was the discovery that the sound of the impact and the intensity of the sensation (or level of pain) do not necessarily correlate. The meaty smack of the paddle is a much bigger noise than the more subdued tap of the cane, but for intensity of pain, the cane beats the paddle, hands down (lol). This was reassuring to him, being of tender heart, he doesn’t actually want to hurt me and so the realisation that big noise doesn’t signify big ‘ouch’ makes a significant difference to his perception of our impact play.

To finish up, K then demonstrated her tools on me, then handing them over to the fella to have a go, while I relaxed and enjoyed being the recipient. He was quite surprised, I think, at how much higher my pain tolerance is – it took a lot more force in the strikes to make me wince than it did him – but then; I enjoy pain, so grinning beatifically is my baseline reaction anyway. K was thrilled to have a willing victim who provided lots of feedback (squeaking and wriggling, mostly) and when the evening came to a close, she and I were both slightly high. I had to consciously put a brake on my reactions otherwise it could easily have tipped into an erotic response, which wouldn’t have been appropriate or fair to either of the others.

The Fella says he had fun and learned loads, but he didn’t get the same level of enjoyment from the activity as K and I did, because he’s a kinkster by more circumstance (being with me) than inclination. The value for him was in the reassurances he took from his experience and the realisation that impact play is more than a linear progression of increasing force, but a matrix of sensation combinations. Kind of like the difference between the amount of heat that adding chillies brings to a dish vs the various flavours that make up the taste (when in doubt; talk about food!)

We did have a solid chuckle at how we each kept thanking each other very politely for their participation. So very British!

I’d like to express my gratitude to K for being a splendid hostess, a thoughtful demonstrator and a wonderful friend; my fella for being – well, simply the best part of my life ever; and anyone who made it all the way to the end of this loooong post.

3 thoughts on “Making an impact”