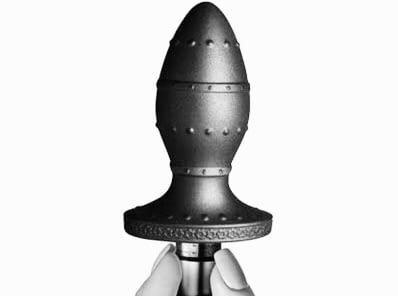 A detailed and thorough review of the toy itself will follow shortly, but in the meantime I absolutely had to write about my and the Fella’s first experience of the Dominus vibrating buttplug, because *OMFG*.

It’s not the biggest buttplug I’ve ever seen, but it’s certainly the biggest I’ve ever had intimate contact with; girth-wise at least, it outsizes any of my collection by a factor of three. This is one chunky bit of gear, and I remind myself that I shouldn’t be upset or disappointed if I can’t take it all at first – there are no points being awarded for dilation achievements here.

We start slow, myself in a comfortable position, kneeling propped up by a small mountain of pillows. He’s behind my raised arse, stroking, squeezing, occasionally slapping at my cheeks and enjoying my wriggling response.

It comes with a bullet that fits inside the plug. Despite its slim and modest size, the bullet’s vibrations are deep and powerful. This being its first use, its safe for him to press it against my clit, trace the outlines of my vulva, slide an inch inside my dripping cunt, before he presses it gently against my twitching whorl. A full-throated groan escapes me as the powerful vibrations meet tightly-gathered nerve endings. Oh fuck, that’s good.

With finger, lube and bullet tip, he helps me relax, open myself to the tip of the plug. More lube, holding steady as I push myself slowly against the solid silicone. I can feel myself stretching to envelop its widening planes, wondering if I’ve reached my limit, testing and finding that no, no I can take this, it sort of hurts but not enough to spoil the dirty, slutty, electric thrill of its ingress. He inserts the bullet and suddenly a powerful throbbing is transmitted though the dense plug. A howl of inarticulate but enthusiastic approval escapes from me, a hoarse chuckle from him.

I hiss and clench my teeth as the first rib of circular bumps slips into me, a wave of sharp pain swallowed almost immediately by a sweep of pleasure. He stops, checks in to ask if I want to continue. I give him the thumbs-up. I’m ok. Go on. Please. The pain has gone. I want more.

The raised rib just before the widest section of the plug, with its own set of bumps, feels momentarily like a literal ring of fire but this too, passes swiftly, leaving me moaning and breathless in its wake. I arch my back, press back against the narrowing plug, feel it slide into place with the sensory equivalent of a lust-roughened growl. I’m gasping, panting, squeaking with delight and desperation, my cunt clenching in envy and entreaty. My mouth is open wide, forming soundless syllables of wonder, my eyes half-shut and rolling at the intensity of sensation within me. My entire backside is throbbing with the powerful bullet’s vibrations, strong enough to reach around my cunt and tighten it til it aches like molten sugar syrup and a strand of drool trickles from the corner of my mouth.

He kneels beside my head, watches my face as I drown in sensation, “God, you’re so fucking sexy” he whispers, and I see through misty eyes, his cock rising and stiffening in his trousers. A little shuffling, and he is seated in front of me on the pillows, trousers discarded, guiding my head down into his hot, hard dick. It smells of the sex we had earlier, my musk and his lingering on the soft surface of his skin. I plunge my lips over his shaft, he grabs a handful of my hair and pushes my head down harder, fucking my mouth with brutal strokes as I suck and swallow, pulling him as deep into my throat as I can. I come up for air, gasping and drooling, almost delirious with savage animal joy, helpless in the grip of the plug’s vibrations and his strong hands. I gaze at him with dewy-eyed adoration, consumed by my absolute need for him to use me. He is only too happy to oblige.

And now I am face down, the plug buried in my arse and his dick pounding at my cunt. I’ve never felt so filled, never really understood before how fucking good double penetration can be. Somewhere in reach of the tip of the plug is a hot, quicksilver patch of me, a small bud of ohmyfuckingfuckgodyespleaserightthere, my previously-undiscovered P-spot. I dissolve into screaming, thrashing, melting orgasm, heightened and lengthened by the relentless power of the bullet’s vibration. He’s getting close to the edge of orgasm himself, the hot liquid tightening of my cunt as I come, almost overwhelming him. He groans and pulls out the plug, replacing it with his dick, and I’m whimpering now, beyond speech, beyond coherence, spreading my buttocks wide apart with my hands to give him deeper access; with a yell and a shudder, he fills me with hot jets of spunk, pumping every last drop of his orgasm into me in a jizz-drenched frenzy, until he and I finally come to rest against the pillows, laughing breathlessly and clinging tightly to each other.

We both agree; this is one badass piece of sex kit.