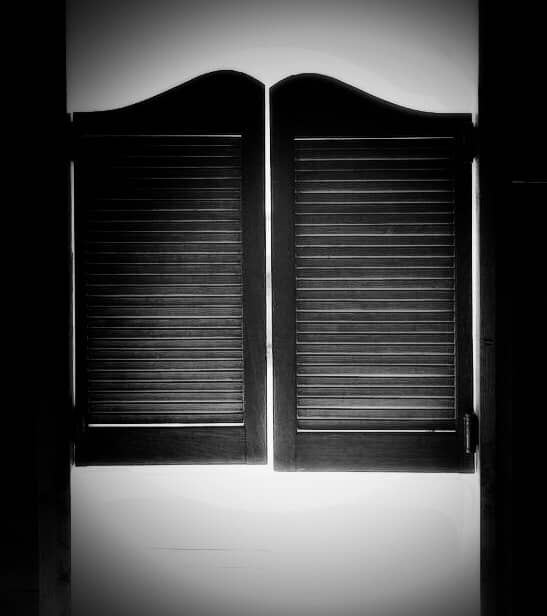 He swaggers in through the saloon doors, leaves them swinging and creaking in his wake. Strides up to the counter with a ringing of bootheels, leans against it in comfortable silence. Surveys the other patrons momentarily, then turns to face Adeline behind the bar. At his back, murmered conversations resume.

Adeline is already pouring the whiskey. A generous measure for a generous man. She’d like to catch his eye like he’s caught hers many a time, but will settle for a brief half-smile and a grunt of thanks. She bustles away to the corner of the bar, resisting the urge to sneak a last sly glance at his handsome narrow-eyed features. Cheekbones you could hang your coat on. Some say he’s part Cherokee, others say his momma was a coolie girl to whom his lawman father took a shine. A scar runs through one thick dark brow and his nose has been broken more than once. Bar fights, stand-offs, mule-kick – the stories fly but facts are few. Rosemary surely knows, but Rosemary doesn’t gossip.

He’s here to see Rosemary, of course. Every Friday afternoon, regular as clockwork. She’s the best whore in town, spoken of in hushed reverent whispers and yearned after with eyes on stalks and cocks standing to attention, but no matter how high the clamour, she keeps this time for him. She’s a whore and he’s an outlaw, but they’ve been sweethearts since forever.

He’s finished his whiskey. Jerks his head questioningly towards the staircase. Adeline dries her hands and sighs. Nods. If she were the jealous type, she’d be running for the sheriff about now. But she’s not. It’s hard enough to find affection around here, let alone love. She envies Rosie and her paramour but its a sweet, melancholy ache not the sharp stab of jealousy. Besides, Rosie has long nails and sharp teeth for all her ruffles and flounces. Not a woman to cross.

The outlaw ascends the stairs steadily. All week long he’s been looking forward to this visit. Every night, he’s pictured her trapped between his thighs with her big brown eyes open wide and her soft pretty mouth stretched full of him. Dear Lord, the things that woman can do with her tongue.

Third door on the right, as always. She’s sitting by the window, legs crossed to reveal her boots and stockings, drinking from a teacup. As always. They have a ritual. He bends to kiss her cheek, then her mouth, cupping her jaw with his hand. A tender greeting before the game begins.

Then, his hand around her throat. Pinned to the chair back, he waits until her instinctive struggles have subsided. When she is still, he strokes her face, clasps her waist. Tells her what a good girl she is.

Rosie knows she isn’t a good girl. She makes her living on her back, on her knees, on all fours; spread and folded, rider and ridden. Her choice. Work is work, she may as well do something she’d be doing anyway and be better-kept than the ranch-wives she sees at the general store. He’s the only man she’ll accept those words from. Coming from his mouth they’re both challenge and reward.

“How many this week?” he asks her, as he always does. She does a quick calculation in her head. “Nineteen.”

“Then that’s nineteen times over you’re gonna pay” he says, uncoiling his whip. “Get on over that bed now.”. She shakes her head, stubborn. “Oh, you’re gonna make me make you? Well sure.” and he grabs a handful of her hair, drags her across the room and throws her face-down onto the bed. Before she can pick herself up and start fighting him, he’s covered her body with his own, pressing her firmly into the mattress. For a moment, she forgets the game and undulates against him, her legs opening of their own accord.

“None of that” he says, and rears up enough to take hold of her wrists, roping them together tightly. “You just keep still now” More rope, securing her ankles to the sturdy legs of the bed, until she is spread and helpless in front of him. Her skirt pushed up, silk drawers ripped aside, now she is ready. He aches to plunge himself inside her right then, but that’s not how the game goes. First, the whip.

Welts rise on her skin.

Now she flinches at each blow, her breath coming in gasps.

Her hands digging clawmarks into the sheets.

She will not cry and she will not ask him to stop. This is a rite of passage, a sloughing-off of the confected saloon-whore skin she wears in the week. She has earned every stroke and will not settle for less than her due.

“Nineteen.” She raises her flushed face, lets out a breath somewhere between a sigh and a whimper. “Thank you honey”

He can’t resist the urge any longer. Drops the whip, rips open his trousers; caught in the snare of her scent and the sight of her. She’s his now, all his and everything to him. He pushes his way into her soft, slick warmth and suddenly he feels like a man coming home. She’s a beacon in the darkness, a mouthful of water in the desert, a blazing sunrise and right now she belongs to him they way she’ll never belong to any of the others. He spreads her buttocks further apart with his hands, and shoves himself deeper within her, riding her bucking hips with the practiced ease of the horseman. She whimpers at the rough handling of her reddened flesh and writhes against him, spurring him on; as much incitement as she can offer.

He won’t let her take control. She’s used to setting the pace, force of habit inclines her to brisk dispatch but he’s not a paying client and he won’t allow her these tricks of the trade. Her small sigh of disappointment as he pulls away from her brings a grin to the corner of his mouth. She’s greedy, his Rosie. She’d take it all now and be wrangling for more in ten minutes if he’d let her. “Oh no, honey” he whispers into her ear “Not too soon now”.

She’s on her back, sprawled across him, his form curled against hers. “Hush” he says to her, stroking with aching slowness. “Slowly now” he admonishes her when her breath comes faster and her muscles start to tense. “Uh-huh” he teases with a smile, stilling his hands when her eyes start to glaze “Not until I say you can”. He knows every inch of her, which finger to place against her swollen button, how hard to press, how long to hold it in place; how to angle his wrist so that she is twice-impaled on his hand, gasping and held taut in obedience to his denial. “Relax” he whispers, and she does; melting against his chest, dripping across his knuckles.

Downstairs, the honky-tonk piano competes with the sodden roar of Friday-night voices, a sound to which they are oblivious. When the bar-fight starts, she will be astride him, held firmly in place as he schools her in the art of the cowboy’s slow rolling pace. As the last lamp is extinguished in the saloon, they are face-to-face, limbs twined around the other; finally he allows her to climax and is pulled down into the shuddering vortex of sensation alongside her.

He will lie with her until the first light of dawn creeps through the curtains, then rise, dress silently, and leave before the Sheriff awakes. She will lie to the Sheriff no, he hasn’t been here and mourn the healing of the welts beneath her dress; the fading of their livid colour measuring the distance between now and then. She will have a new number ready for him when he returns.

In substitution for Pervember 18: Overstimulation (about which I know nothing), I’m playing the ‘Prostitution’ joker based on a role-play fantasy inspired by one of the Fella’s hats

14 thoughts on “The Outlaw and the Whore”