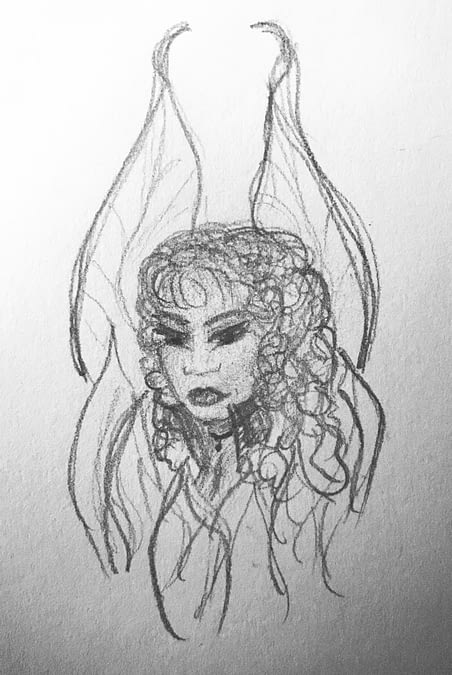 Tonight she is hunting, prowling the narrow dim-lit, littered backstreets; with jaguar stealth and reptilian intent. As she passes, dead leaves and empty cardboard takeaway boxes crumble to ashes, conversations fade to uneasy silence, streetlights flicker. In her wake, wholesome desire becomes ravenous depravity, admiration darkens to slavish worship, human eyes dilate with human lusts. She ignores their tiny whispers, mere nibbles at the edges of her awareness; tonight she is stalking bigger game and has no time for these insubstantial morsels of mortals. She likens them to the cheap fast food they seem to enjoy so much; dead consumables made of fat and starch, produced by an industrial slaughterhouse for degraded tastes.

Her banquet will be so much finer. Refined. Matured. Flavoursome. The twin darts of her tongue taste the air as her black lips part in a sly smile of anticipation. Someone’s been raising a demon in the west quarter of town lately, the stink of a decaying old soul has been casting a pall over her territory for several days now. The effrontery! But pique pales in comparison to her sharp-edged, blood-drenched hunger. The human acolytes whose devotions have caused her to be drawn from her lair, she will deal with at leisure for their presumption. This is her town. Her domain. Her kind do not negotiate or seek compromise. They kill. They eat. Sometimes they do both.

A shabby recessed doorway reveals a peeling but sturdy door marked with – of course – a pentagram. She shakes her head half in amusement, half in disgust at the cliche, at the pretentiousness. At the folly.

Locks do not keep her out, doors do not slow her advance. Over the dusty staircase hangs a single bare bulb which sparks and fizzles out as she passes beneath it. She has no need of eyes now – the scent of her prey guides her up the three flights of stairs to a second door. Behind this she knows there are humans in ridiculous robes drawing their petty scribbles on the floor, chanting their meaningless syllables, playing like children with powers far beyond their comprehension. They want a demon? There’s one right here kids. Oh yeah, we’re gonna play. But first….dinner time.

They are, as she expects, thirteen of them kneeling in a circle. Stupid humans. Weak, pathetic, needy creatures, shocked to stillness with the violence of her entry. Around them are black candles, salt, the athame, blood, all in the correct positions for a summoning. And in the centre, wreathed with flame, is her adversary. Her prey.

A moment of shock – she might be looking into a mirror (if such a thing were possible for a creature made of illusion and darkness). The other demon is….herself? No. She is herself. This is an imposter, an intruder not satisfied with the mere invasion of her territory, adding further insult to what was already a serious breach of courtesy.

“I’ve been waiting for you” it says, with her voice, smiling from her likeness’s mouth. This is no accidental boundary infringement. It’s starting to smell strongly like a trap. Demons hunting demons? It’s their favourite game. She’s been too comfortable for too long, got careless. Walked into an ambush. She’s clawed her way out of worse.

It’s bound with the chains of metaphor that the summoning placed upon it. They gleam white-hot in the dim room, tethering it to the circle on the floor. She grins. Flexes her arms.

She wears no chains.

Demons do not feel fear. But there is a flash of concern in the other’s stolen eyes. It did not expect to face an unfettered opponent, had not calculated a rogue into its careful machinations. The summoners, from being a source of its strength, are now captured suddenly becoming an encumbrance. It cannot flee unless they release it. They cannot release it unless she releases them. It cannot fight – and hope to win – while anchored in their ritual. Now would have been a good time for them to run, but they are already caught, paralysed in her glamour, rooted to the floor and unable to do anything but watch as their evening’s entertainment becomes someone else’s.

She reaches out a hand, throws a loop of fire over the other demon’s neck. “Down” she commands, and it sinks to the floor, snarling.

“On your knees” she instructs it, and laughs with devilish joy as it struggles against its leash. The harder it struggles, the tighter the loop is drawn, the hotter the fire searing its not-flesh. She hears its voice, identical to her own, scream with rage and refusal, watches her own features drawn into a grimace of effort and fury. This is how she will look and sound when she herself is taken down. The thought strikes a perverse chord within her, curiosity tempered with resentment. She opens her hands, ready to begin the feeding.

Demons don’t compromise and they don’t negotiate. She’s hungry and wary and more than a little angry; if it were begging for mercy she would tear its limbs apart slowly, if it showed defiance, she would rake its imitation skin deeply. If it had stayed silent, she would have consumed it by now.

But demons love to gamble; the higher the stakes the more tempting the game.

“State your terms” she tells it brusquely, annoyance at the interruption to her meal only mildly appeased by this new diversion.

“I can help you. Assist you. Hunt with you. You will find me a useful companion.”

She scoffs, and says in scornful tones “I hear no wager here, imp. Just the desperate pleading of a creature facing extinction.” She moves towards the circle again, eyes alight with greed once more.

“The wager is thus” continues the other demon quickly, ignoring the insult. “If after a year and a day, you are dissatisfied with my companionship, I will surrender to your will. If at any time during our association you are displeased with me, you may feed upon me. But if, after that year and a day, you feel that I have earned my freedom, you will grant it to me.”

She mulls this over. There must be a hidden trick, no demon would ever willingly submit to servitude, no bargain with the creatures of Hell is ever struck in good faith. Is the amusement of enslaving one of her own kind worth the danger incurred? She has been bored lately, a respite from the ennui of feeding on the farm-bred cattle that inhabit this city was the lure that brought her here to this moment. Is the dreary prospect of another hundred years of subsistence spent among the feeble specks of humanity worth risking the fleeting satisfaction of the victory she has already won tonight?

“What use do I have for you?” she demands in harsh tones. “What can you offer me that I cannot find for myself or take with my own claws?”

It bows its head. Her head. “Allow me to demonstrate”

She nods. It is chained, there is no danger; what does she have to lose?

“Come closer” it says, reaching for her.

She does not expect its touch to be so light, so soft and pleasing. It strokes her lips, caresses her throat, trails its fingers down to her breasts. It enfolds her in its chained arms and explores her mouth with its own forked tongue.
“I can show you….wonderful things” it whispers to her, and she feels a fire ignite within her. Not the caustic inferno of Hell, not the sullen glow of hunger appeased, this blaze is somehow warm and pure. It reaches tendrils down through her and cups the place where – if she were human – her cunt would be. She throws back her head and howls as the alien sensations rip through her, she bares her teeth and hisses, writhing and pulsating in the grip of the lust consuming her.
Her twin is grinning, licking its black lips with its snake-like tongue, as it kneels before her and presses its stolen face between her legs.
“One day” it whispers “you will beg me for this. And then, you will be my slave”
She does not hear its words through the crackling of flames wreathing her form, does not see through her pleasure-glazed eyes, the smirk that flickers across its familiar features.
“I accept your terms” she gasps, and takes handfuls of its hair in her sharp-clawed grasp, bucking her hips and grinding herself against its lips and teeth and tongue. “One year. One day. And you will do this whenever I command.”
“I am at your service, Mistress” croons the other, watching with satisfaction as the seed it has planted begins to take root. Dependence it muses is fostered not in fear, but in need. And you will always need me now.