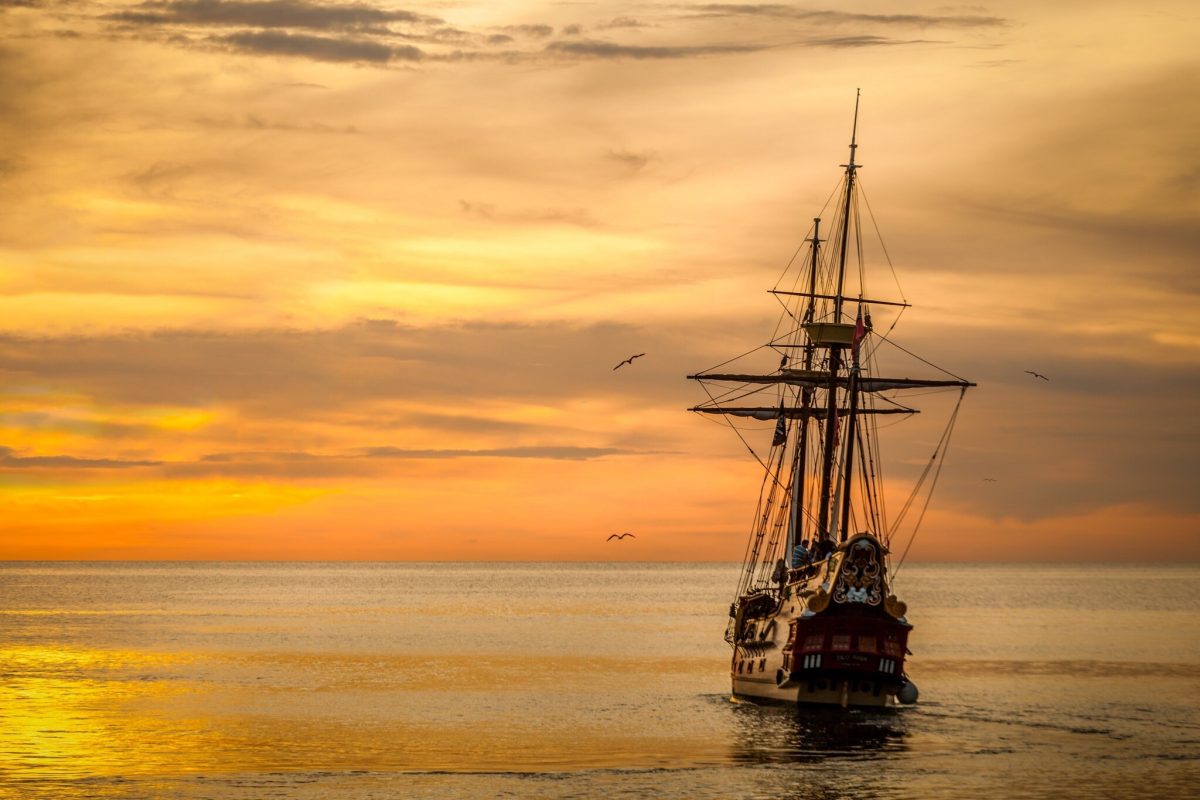 Part 4 of the tale of the Governor’s Wife

Part 3: In The Cargo Hold

It’s been three days since the mutiny which saw the Captain, First Mate and the Bo’sun marooned in a rowing boat with only a single pistol between them. Three days, and the smell of cordite has yet to dissipate from the cabin where they made their courageous but ineffectual last stand.

She did not see the desperate struggle as it unfolded, could only hear their shouts of outrage and protest as they were dragged from the Captain’s quarters and herded abovedecks for the reckoning. It would have been exciting to watch, but she was confined to her cabin before the fighting started and has remained there since.

In her musings, there is pity for the ship’s officers, of course – they will require the luck of Lucifer himself to be found and rescued before the lure of the gleaming black pistol overtakes their reason. And there is a clawing concern for her future at the hands of the remaining miscreants lurking beneath her patient stillness. But most of all, there is boredom. She has spoken to no-one since she was unceremoniously hustled through the door of her cabin and bade to remain quiet by the mutineers. Ship’s biscuits and water have been slid across the threshold several times, but no-one has addressed so much as a word to her directly in days.

Has she become so insignificant? The idea fills her with outrage – a rogue crew of rough-hewn sailors who have committed the most serious crime possible upon the waves and yet they treat her with gentility bordering on indifference! This is an unnatural and prideful way to think, she knows. The dreadful indignities they might visit upon her person should strike fear and loathing into her breast; she should be on her knees in supplication to the Almighty, praying for deliverance. Instead, she is idly contemplating the rope and the candle, wondering which is most likely to distract her from the tedium.

A knock sounds at her cabin door, jolting her from her reverie.

“You may enter” she calls, her tone agreeably firm and strong. Bored, frustrated and a little afraid she may be, but she is an English gentlewoman and has been schooled in the art of imperturbability.

The new Captain presents himself in the doorway. A significant aesthetic improvement on the departed; this man is younger and well-built. He stands with confidence and loose-limbed ease, his shirt, breeches and boots adorning a well-muscled frame. Dark auburn locks are tied at the nape of his neck, exposing proud, hawk-like features.

“My Lady” he greets her. No trace of mockery.

“Captain -?” she leaves the title hanging, a subtle insinuation of how insignificant this man was to her prior to his impromptu advancement.

“Blackstone, my Lady. Captain Elijah Blackstone”. He sketches a mock bow, he has surely perceived her inference and seems to find it amusing.

“Well then Captain Blackstone. I would offer you tea, but since you appear to have commandeered my husband’s ship and cargo, the tea I would offer now belongs to you anyway.” She shrugs prettily. “I pray that you will forgive the shortcomings of my hospitality”

He laughs, an attractive sound filled with mirth and good humour.

“Indeed, my Lady. This crew now owns the ship and chattels. I encourage you to remember this; in effect, you also now belong to us.”

She inclines her head, lowers her lashes, hiding the pulse of excitement behind a facade of modesty.

“So it would also appear Captain. May I enquire as to your crew’s designs for their newly-acquired bounty?”

He sighs. “We are not savages, my Lady. We are merely tired of the oppression of the ruling class, of working ourselves to the bone for the enrichment of others and of the injustice which binds in servitude from birth. Provided you are compliant and cause us no trouble, you have my word that you will remain unmolested until we are in a position to give you your freedom.”

She is disappointed – and chides herself for not feeling relieved. Savagery is all very well in fantasy but she should care little for it to be imposed upon her by force. And yet, the notion causes her pulse to flutter, her breath to catch.

He steps closer, closes the door behind him.

“However” he begins, a smirk tugging at the edges of his lips “based upon my observations, it would seem that this reassurance is perhaps counter to your Ladyship’s true wishes? Oh, I have seen the glances you snatch at the crew when you believe yourself to be unobserved.” Closer still, until she can feel his breath upon her face, he continues in a low voice “and I myself have bent to the crack in your cabin wall and watched you indulge with lustful abandon, your nightly ministrations. Could it be that you are in fact, a doxie at heart? Do you yearn for debasement? Would you protest with sincerity, were I to submit to the urge for ravishment that your sweet countenance and most attractive form awakes within me?”

He is pressed against her now, the heat from his body bringing a flush to her cheeks. She keeps her head lowered, torn between shame and arousal.

“Perhaps” he whispers into her ear “you would not be satisfied with only my attentions? I think my Lady, that you have the heart of a slut and the soul of a wanton. It grieves me that such ripe fruit should be sent to wither on the dry vine of a joyless marriage without having ever known true appreciation for its charms.”

He places a hand on her jaw, tilts her head upwards until she looks him in the eye. Her flush deepens.

“I would have an answer from you my Lady” he growls, and her knees are trembling, her eyes wide. She has never been spoken to with such candour and authority. She wants – so much – to feel desired, to be plundered and roughly-used. She meets his eyes, parts her lips.

“Please” she whispers. “I would….” the words catch in her throat, a lifetime’s training battling overwhelming carnal urge. She gathers her senses.

“I would consider it a kindness if you would permit me to be of service to your hard-working brothers in arms” she declares, her voice growing stronger as she presents her case “such principle and courage as has been demonstrated in overthrowing the shackles of your former masters is surely to be admired and rewarded. If I can play some small part in maintaining the morale of your new crew, then it must be my duty to do so.”

He is smiling wickedly down at her

“Nonetheless, it would not do to offer myself so freely as to provoke the tarnishing of my reputation once I have reached my destination” A deep breath. “Therefore you understand that I must not appear too eager or willing to indulge in my gesture of goodwill.”

He understands. Nods, his eyes sparkling and a noticeable swelling within his breeches. “Then my Lady, we shall have an accord. You may pay your respects to my crew as you please, and I shall allow them to accept as they please. But should you become distressed or weary, know that you need only to call for me, or cast your eyes my way and I will order an immediate cease to proceedings.”

His hand moves down to clasp her throat. Her skin is afire with burning anticipation, her corset suddenly too tight, the swirls of silk in which her skin is wrapped becoming damp and clinging. She is lightheaded and full-blooded, short of breath and heavy-lidded with lust.

Elijah Blackstone surveys the woman before him with a mingling of admiration and desire. She is his responsibility, she is his property. He will enjoy seeing her spread and debased before him, the plaything of crude men with animal urges. When they are spent and sated, he will claim her for his own; and place her pleasure above all other consideration. His arms rise to embrace her, pressing her face to his shoulder in a gesture of assurance and affection.

“Well then, my Lady” he smiles, releasing her and turning to scoop up the rope from its lair beneath her bunk. “Let us proceed to offer my excellent crew their delightful reward. Hold out your wrists.”

As she complies, she is filled with an unfamiliar sense of warmth and completion. This is what she has unknowingly yearned after for so many years. This is her destiny and her desire.