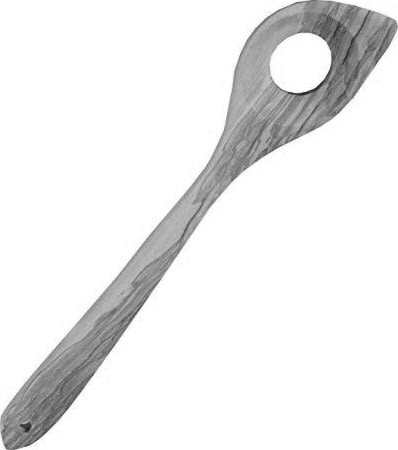 From the kitchen comes increasingly desperate clattering sounds as Anika searches for a very specific wooden spoon with all the urgency of a trapped miner who knows there’s one more stick of dynamite somewhere under the rubble.

“It’s just a risotto” she mutters to herself as she upends drawers and burrows into overstuffed cupboards. “It’s just a cosy dinner party with friends. It’s not the end of the world if I have to beat the damn thing with a normal spoon. No-one will notice any difference.”

She pokes irritably at a nest of cake forks.

“No-one is going to say ‘Oh Anika, the risotto was delicious, but have you tried using a spoon with a hole in it to beat the cheese in?”

But it’s the principle of the thing. Risotto should be beaten with the right implement. She owns a risotto spoon. The fact that she has one but can’t find it to use seems inexcusable suddenly – how on earth does one manage to lose a risotto spoon?

She blushes. Ah yes. It’s not lost….it’s in her bedside cabinet. Grimaces. Memories of a departed lover she’d rather not revisit at this time, when the tearing agony of heartbreak has just about subsided to a dull ache – and she has so much to do still, before her guests arrive. She races to the bedroom to retrieve the spoon.

The risotto has turned out perfectly – gooey, chewy, cheesy with a slight crunch provided by the fresh asparagus tips. Good thing I found that spoon, Anika congratulates herself, seeing the expressions of delight on her guests’ faces as they tuck in.

One face, in particular. It’s just such a watchable face, mobile and striking; with those dark eyebrows and knife-edge cheekbones framed by waves of long black shining hair. Kali’s face. Lately, Anika has been picturing that face in idle moments, wondering whether the impish grin it usually wears would disappear if the owner knew how much time Anika was spending in contemplation of its charms.

They met in the local craft shop; Anika in hot pursuit of a reduction in cashmere knitting yarn, Kali idly browsing the embroidery threads. They’d bonded over WonderWeb and the irritating disappearance habits of safety pins, gone for coffee, ended up slurping white wine in a local bar and cackling raucously at off-colour jokes. Kindred spirits; they’d taken to meeting once a month at the shop, exclaiming over each other’s acquisitions then heading to the bar for more wine, more laughter.

Kali is exotic, assertive, unashamedly intelligent, occasionally caustic. Anika feels so pale beside her, so contrastingly Scandanavian-serious and reserved. Kali brings out the inner wild child that had failed to manifest itself during Anika’s adolescence. Better late than never. She spends all month looking forward to their meetings, the couple of hours they spend together leaving her feeling flushed and daring. Several times, she has caught herself flirting with her friend. Once or twice, she has engineered an opportunity to move just a little closer; although the “you’ve got fluff on you” routine was probably not as convincing as she intended. Kali wears spicy scents, musky and heady. Anika has often wondered if her friend tastes as good as she smells.

The risotto is sublime. Chewing dreamily on a mouthful of exquisite flavours, Kali surveys her surroundings. She’s never been to Anika’s flat before. It’s so different to her own. She thrives in organised chaos, her nest a riot of colour and shapes; cluttered but clean. Her new friend seems to live a more regimented existence; the sort of person who stacks coasters away neatly in a special holder when the mugs are empty. Who organises her yarn stash by fibre and colour into plastic craft supplies crates, and had ring-binders full of recipes in alphabetical order. Admirable but incomprehensible to Kali, who considers herself far too free a spirit to concern herself with such mundanities as shoe racks or letter-openers.

Her fellow guests are as oddly-assorted as herself and Anika. James and Andy; a lawyer colleague of the hostess, and a music producer respectively are rugged outdoorsy types, but both entertaining in their own ways once prised from the subject of kayaking, a subject about which Kali knows nothing and cares even less. Steve, Anika’s old University friend is more Kali’s type, darkly funny and wryly cynical. He investigates fires for a living. Arson or accident? It sounds like one of those jobs which involves a lot of paperwork, more than enough to quell the excitement of hunting answers or unmasking miscreants. Steve is obviously hopelessly in love with Anika, probably has been for years, but too scared to declare himself he has merely stood at the sidelines watching a procession of less worthy men tread Anika’s heart underfoot, all the while hoping she might one day turn to him for more than comfort.

Steve is a rival.

After the meal, James and Andy insist on doing the washing-up, their cheerfully comfortable banter bouncing across the kitchen’s pale steamy walls as they load the dishwasher and scrub out pans. Anika is reclining on the ludicrously comfortable Ikea sofa, finishing the last of the white wine and chortling over Steve’s light witticisms. Can she see the glint of hopeless adoration in his eyes? From Kali’s perch on the leather pouffe at the apex of the triangle they make together, she doesn’t think so. Steve, to Anika, has become part of the furniture, a matching set alongside the sturdy bookcase full of chick-flick DVDs and the Laura Ashley print cushions. She doesn’t want to have to fight any duels, but with five older brothers and a set of claws kept sharp against the scratching-posts of her gossipy extended family; Kali is well-defended against any wounded male prerogative that might interfere with her designs.

Anika, Kali and Steve bid goodbye to James and Andy, who share a distressingly early-morning running habit, and therefore need a full eight hours sleep in order to squeeze maximum utility from their lean frames. They compliment Anika on the risotto, the wine, her congenial hostessing skills, kiss Kali on the cheek and profess themselves delighted to have made her acqaintance, shake hands with Steve who has been a fixture on the horizon for as long as they’ve socialised with the quiet serious-faced lawyer he adores. As they make their way down to the front door of the apartment building, James shakes his head in sympathy. “Poor bloke. He’ll never get a look-in”. Andy agrees. Kali is a prancing thoroughbred mare to Steve’s loyal carthorse. And they’ve known Anika long and well enough to understand what sort of wild ride she prefers.

Steve carefully conceals his despondency behind a manufactured yawn, and takes his leave before any awkwardness can ensue. He will go home and comfort himself by taking his ageing greyhound for a late-night potter. He will try not to think of Anika’s pale rangy limbs wrapped around Kali’s dark curves, push away the image of a long-fingered brown hand reaching into a secret frizz of blonde hair. Inevitably, his fantasies will leave him panting and shuddering, leaking from both eyes and his cock by midnight.

Kali sets down her wineglass and kneels at Anika’s feet. Slips off her hostesses stiletto heels and glances upwards, hopefully and with longing.

Anika reaches out to stroke the lustrous black hair spilling over her friend’s shoulder. As she tugs gently at a handful, bringing Kali’s upturned face towards her own, she find herself making a mental note of which drawer the risotto spoon has been returned to. She has a feeling she’s likely to need it later.

10 thoughts on “The Dinner Party”