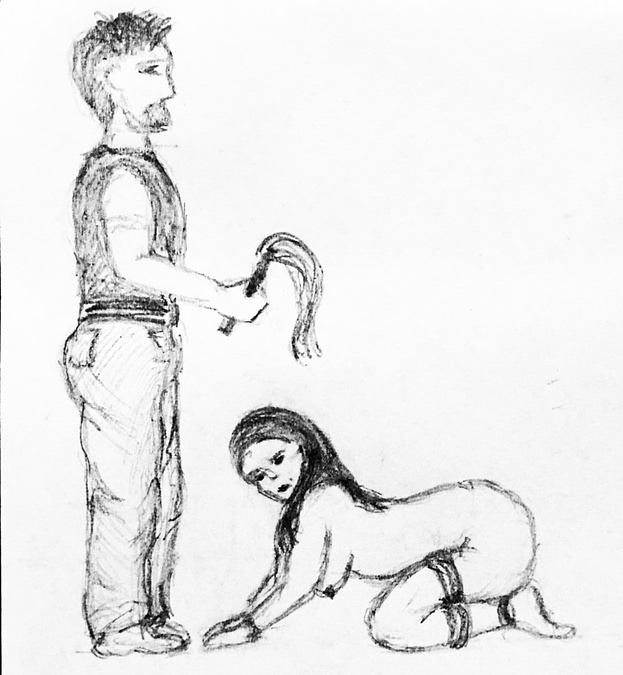 She is a silent presence behind him. Bound to the chair in the corner, blindfolded, commanded to stillness and quiet; her very presence is a vortex of frantic energy. She wants attention, gratification, sensation, and has yet to learn that these things must be earned.

He suspects that for all her eager compliance, there is a strong streak of brat running through her, though while she is too young and too inexperienced to know this for herself, he will not seek it out and tame it. Given the choice, he would ask for her pure submission, her total acquiescence to his mastery – but a choice that is understood by only one of the negotiators is no choice at all and he is too upright a man to take unfair advantage of her naïveté.

She comes to him weekly, all wide-eyed anticipation and breathless desire; lush and ripe, he could pluck her, devour her, sink his teeth into that soft young flesh, take everything she offers until he is spent and she is truly his. He lies awake at night and stares into the middle distance during the day contemplating the delightful, depraved things he would do to her. If she were ten years older and a good deal wiser, he would do these things and more.

She does as he orders, and that is its own satisfaction in the moment. Every shy blush as she seeks to please him, each flash of longing in her dark eyes is both gratification and warning to him – yes, she will undress, offer her wrists for the cuffs, kneel before him and open her throat to his lust-hardened cock; she will whimper in half-ecstasy, half-protest at the clamps, pinches and slaps – she has never yet refused him despite her occasional uncertainty, and this power he has over her is as much a risk as it is a reward. She will bend across his desk and bare her smooth buttocks for him, spread her wet cunt and moan at the heat of his mouth devouring her, stand quietly in the corner with head bowed until he is ready to use her again; all the while pleading with her eyes, coaxing with her lips.

She has not yet honed the art of coquetry without tawdriness, nor can she fully disguise the deeper needs that drive her to seek his approval and attentions. Those needs bind her as cruelly as barbed wire, holding him at bay for fear of causing damage he does not have the means to heal.

He knows she wants to be taken. She pleads with him to fuck her, desperate to be filled with his thick cock, anticipating that this as some kind of victory to be won by subterfuge and seduction. To refuse her this ultimate surrender is part-sadistic tease, part-noble sacrifice. Underneath her hard-bitten exterior and wanton promise, she is young and vulnerable. He doesn’t want to hurt her more than she can endure and he certainly doesn’t need any seepage of her wistful romantic notions into his ordered and precise existence. So he touches her, holds her, explores and subdues her – sometimes gently, often not. He commands, and watches closely for her limits even as he luxuriates in her obedience. He plays with fire, but keeps the flame contained. He is a responsible adult but definitely no saint.

What then, should he do with her today? He is a master of suspense and denial, a genius at inflicting small cruelties and minor humiliations, at keeping her desire held to arms length while he indulges as much of his own as he can allow. Her mouth is so soft, so wet and warm, her tongue so agile, perhaps she has earned the privilege of his cock deep in her throat. If she performs well for him, he will wrap the thick rope of her long dark hair around her throat and bring her to orgasm with his powerful fingers the way she craves, if she is petulant or demanding, he will send her on her way with an aching empty cunt, having explained to her the error of her disrespectful ways.

As always after she has left, he breathes in the musky scent lingering on his fingers and reminds himself how much he cares for her – and how not-enough that could ever be for him to relent. On day she will understand, he hopes. He is a patient man.